I’m always looking for different ways to test the understanding of my pupils and on a cold Friday afternoon after a long week; the requirement was focused towards doing this in a fun way. Having moved from a reading to a writing unit with year 7, it became apparent that although some pupils had a clear grasp of the rules of sentence structure and punctuation, others needed a refresher and apostrophes became my topic of choice. The group are a lively and ‘able’ bunch (I’m not fond of using such terms) and teaching them last lesson on a Friday always produces a series of interesting challenges.
It’s worth mentioning that ‘apostrophe dancing’ is something that I adapted based on Phil Beadle’s Kung Fu Punctuation as it was a technique that most pupils were familiar with from a primary setting. Having recapped in the latter part of the lesson on the function of the possessive and omissive apostrophe, constructed our own examples and discussed pluralisations; I felt confident that the last 10 minutes of the lesson could be given over to a spot of dancing to demonstrate understanding.
I presented pupils with the following instructions on a slide and we practiced the moves until they were confident. 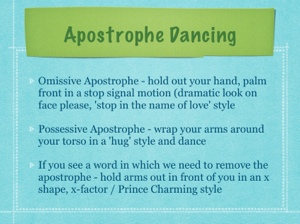 I then had a slide which included 6 sentences showing either incorrect, misplaced or missing apostrophes which I read out. For each, the pupils had to quickly identify the mistakes, stand up at the correct time (when the offending word was spoken) and complete their dance move. After each sentence, I moved around the room asking pupils to justify and explain their answers. It was clear to see those who were less than secure in their understanding which enabled me to focus my intervention and future planning. 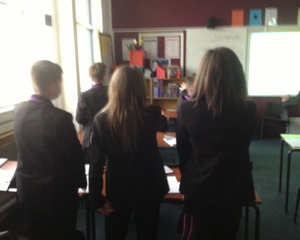 From a knowledge and understanding point of view, I found that although largely familiar with the function of apostrophes few pupils knew the terms ‘possessive’ and ‘omissive’ which i know is not vital but I do feel it is important. This exercise offered a spot of Friday fun for my class and it will certainly be one of those ‘activities’ that will be recalled as we are exploring our writing in future lessons. Who said learning can’t be fun?