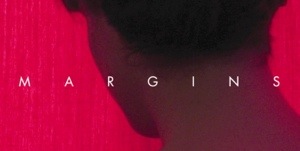 …My private heart. Here I am thinking in pictures again…

As a student of media theory, I find the power of images fascinating. I’m always the (add your own adjective here…kind,specific and helpful please!) one with the camera, capturing the moment, and with this in mind I wanted to bring my passion for pictures into the classroom. Being an avid fan of Thunks and using my own manipulation of them I also wanted to develop the fascination; the aim being to guide my pupils towards thinking on a deeper level and hoping to prompt discussion and debate.

Thinking back to being at school, I distinctly remember being surrounded by paintings and pictures (grand old building, lots of history, you get the picture). The maths classroom was full of Escher prints (see below) which I found fascinating…far more fascinating than trigonometry and thinking about it, that’s exactly how my maths teacher managed to engage me which was no mean feat. Kudos to Mr B for that one! 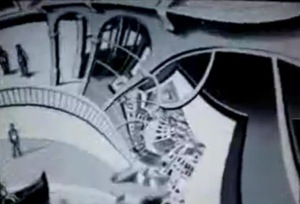 Photographs and pictures, be they polaroid or painting, might draw an unconscious association or an implied meaning, but always trigger a personal response. Although their true appeal to me is like poetry, they are open to interpretation; lending themselves beautifully as a resource, to tapping in to higher order skills: justifying, analysing, evaluating.

A picture paints a thousand words, or so they say and that is why i try to identify pictures or pose questions that encourage a limitless possibility of answers. Which is right? Who’s to know? It gets them talking and thinking because in the end, it’s all about perception. It is this skill of reading a picture in the same way that we analyse a poem, using the clues, that I was hoping to build upon, using the hook of multiple interpretation.

My Thunks so far have incorporated both text and image: lyrics, quotes and music but I’ve recently been drawn to use images to trigger a response. Sometimes pictures are accompanied by levelled (SOLO) questions, others with a key statement to prove, disprove or discuss, sometimes with no text; letting them figure it out for themselves which always provides a fruitful dialogue. I particularly like the scope of interpretation here, removing the fear factor of getting it wrong. There isn’t a wrong answer necessarily, which is safe; a pleasing prospect for some, which works as encouragement, ensuring full participation, my answer isn’t wrong because it’s mine and I can justify it.

I started with simple association, selecting a series of pictures which I thought represented the main analysis points in the prologue of Romeo and Juliet, and used this to trigger the thought process. Due to the ambiguity, the discussion which followed was particularly useful. (See below for the Thunk) 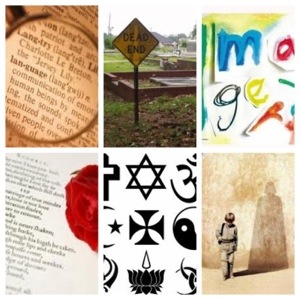 How might the pictures represent the key points that you will consider in your writing?

As usual, I had this waiting for my year 10’s as they entered the classroom. They had clarified the requirement, How might the pictures represent the key points that you will consider in your writing? before entering the classroom to prepare a response. When it came to the share stage, pupils were able to contribute their thoughts, linking with the work we had done to date.

The process provoked some great responses, some more simplistic justification and the picture of the signpost prompted quite a debate. Another use for this particular image, beyond getting pupils to ‘actually’ remember elements of a play that they were unfamiliar with, was as an ‘aide memoire’ when actually writing about the prologue. It was a handy go-to, ensuring that everything had been covered, a visual check list, bingo card style!

In the lessons which followed, I utilised pictures as a visual clue when posing questions such as can you love someone as much as you hate them? Which prompted emotive and well considered responses in a situation in which some pupils may not have engaged as deeply, had I simply presented the question. 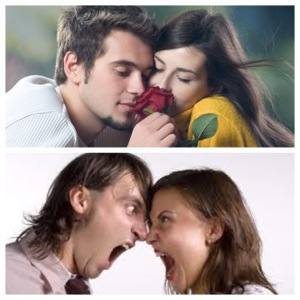 Can you love someone as much as you hate them?

I’ve always enjoyed using pictures within my teaching; as a basis for creative writing or poetry, making links and to prompt pupils to engage with the journey of the lesson of course. My picture Thunks are by no means Escher prints but if it gets them engaging with a concept, idea or theme and really thinking about it, I’ll continue trying to develop their skills by thinking in pictures.