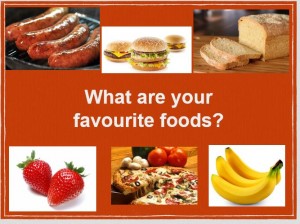 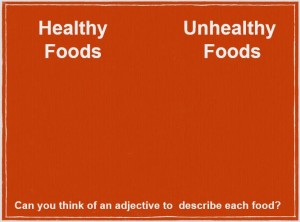 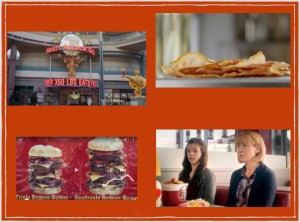 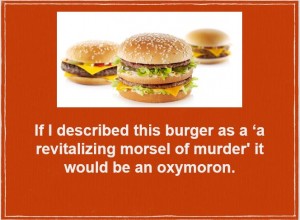 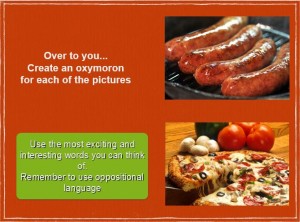 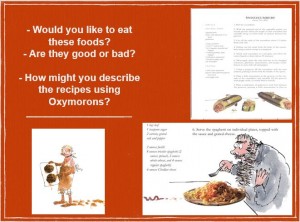 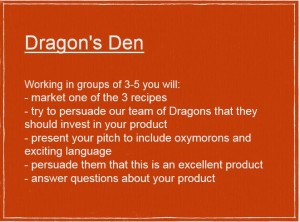 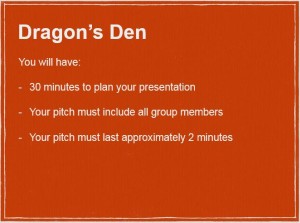 This was an idea that came to fruition while planning for Summer School this year. The theme was Healthy Eating and let me tell you, it’s not always the easiest theme to work with when trying to plan something engaging and memorable for the new Year 6 pupils. The ‘making it stick’ factor is really important during sessions like this and I knew I needed to come up with something familiar yet exciting. A ‘teacher adventure’ is always useful in these situations, and the return journey from Chester with Lisa gave me the chance to refine the idea.
I had the basics. I knew I wanted to use language and explore how it was manipulated in advertising by fast food companies. I knew I wanted to incorporate the giant word web (this is something I’ve been toying with for a while in smaller versions but it was time to super-size it. Pardon the pun!) I also knew I wanted to get Roald Dahl’s Revolting Recipes in there and I knew I wanted the pupils to give some sort of Dragon’s Den style finale to develop their presentation skills. It’s becoming increasingly hard in a context where speaking and listening is loosing it’s numerical value at least, to get pupils standing up and speaking confidently; so I wanted to challenge that fear.
The value of professional dialogue can never be underestimated and having a like-minded teacher to walk through the process is so valuable. As we were talking through the idea, Lisa mentioned a fast food company in America, The Heart Attack Grill, that had taken the idea of food advertising and completely turned it on its head. It’s a fascinatingly honest concept which forces people to face up to the damage that this kind of food is doing to us. A complete contrast to the positive interpretations that we see on a daily basis. Being an English teacher, this presented the opportunity to explore oxymorons and the idea was set.

The morning started as it often does, with a series of pictures as an ice-breaker (fruit, vegetables, burgers, bread and fast food), and the pupils were asked to identify their favourite foods, explain their choices in order to extend their answers and finish by developing a series of adjectives to describe them.

We then inked back to the theme by sorting the foods in to healthy and unhealthy categories which enabled us to debate more complex foods and comment on why they might straddle the categories, before linking back to the adjectives they had come up with.

The next step involved watching a series of ‘fast food’ chain adverts. The pupils found it interesting, identifying how they had specifically highlighted the ‘healthier’ elements of their food such as the salad, while choosing to avoid the negatives entirely or focus on a story rather than the food. It was at this point that we explored (edited for the audience!) The Heart Attack Grill concept and the purpose behind the advertising. Pupils were then presented with oppositional language and thought about how we could use oxymorons to represent the concept of food that was both delicious and deadly.

To reinforce the focus on language choices, we then ventured outside to create a giant word web in which adjectives were used to develop a range of oxymorons for healthy and unhealthy examples. My favourites included ‘a life-giving morsel of coronary failure’ and ‘a delicious slice of death’, points were accumulated for the most unusual and creative.

After a short break it was back to the classroom to analyse Roald Dahl’s Revolting Recipes and come up with some exciting oxymorons to describe Snozzcumbers, Fresh Mudburgers and Mosquitoes’ Toes; before introducing the final task: a Dragon’s Den-style presentation of one of the recipes. Pupils watched extracts from Dragon’s Den, identifying the basic structure, content and requirements of a pitch before getting to work on their own, using the language and techniques which we had developed throughout the morning.

When it came to presentation time I was pleasantly surprised. All groups not only participated but really impressed me with the quality and content of their work. Speaking to a group is rarely first on anyone’s list of ‘things that i enjoy’, yet each presentation had something unique and all had a very promising grasp of language.

With the presentations all finished, ‘healthy’ prizes were awarded and I even heard a few whispers about not visiting the Golden Arches during the holidays. We’ll see!