Aside from planning, marking is the area that takes up most of the time in my life and being an English teacher, it can sometimes feel somewhat overwhelming so I’m always looking for useful tips or techniques to ‘lighten to load’ so to speak while still aiming for quality feedback. During a trip to #teachmeetEnglish in Leeds in the summer I was interested to hear about a technique used by @amsammons which he had developed from @kevbartle ‘s work using a Taxonomy of Errors. Both offer great blogs about the Taxonomy and their experience of its use and can be found here on the Canons Broadside blog and here on Andy’s blog Englishnthat.

In short the Taxonomy of Errors approach is used to identify common mistakes which appear in pupils work, ensure that they are able to identify them and subsequently rectify said issues; therefore making improvements.

Working on a creative writing unit with key stage 4 pupils, we had a period of teaching the skills, analysing similarly featured examples and drafting paragraphs. It had got to the point where pupils were ready to draft an extended piece and I wanted to make sure that they were not only able to receive quality and detailed feedback but also to reflect on the feedback given and really use it in a focused way to improve their own work.

As it is school policy to offer pupils a WWW (what went well) and an EBI (even better if) after each substantial piece, I wanted to ensure that as well as having this as a general for the overall piece; pupils were offered specific feedback for each paragraph; my aim being to ensure that they could use detailed feedback to improve each area, rather than simply applying one focus to the redraft.
As you can imagine, the sheer time constraint of writing individual feedback for every pupil, for each paragraph in a seven paragraph piece would be mammoth. This is where the marking grid came in.

Having identified a range of target areas, I compiled a grid with a numbered key, see below: 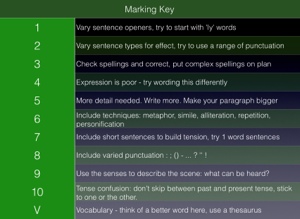 This enabled me to save time with the comments that I was making; rather than repeating the same feedback in several books, I was able to simply put a number reference which pupils could then refer back to using the grid during directed reflection time. 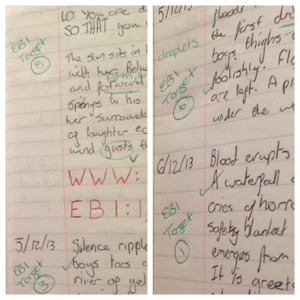 As a time saving aid, I found the process particularly useful of course but to me the real benefit of using a marking grid was the process that pupils worked through when improving their own work. Initially, they were required to interact with the feedback on a deeper level by actually having to use the key to identify the necessary improvements prior to redrafting each section. Secondly, it enabled focused feedback on each area of the piece rather than a more general overall comment at the close; which was useful in making quality improvements to the draft as a whole. Finally, when used with peer feedback, I found it to be particularly useful in acquainting pupils with the finer points of the assessment criteria, the result being that the peer feedback given was more ‘specific’ and ‘helpful’ rather than general. I feel that it worked with my pupils to focus their engagement on feedback and saw improvements in subsequent drafts.