This is such a simple technique but i’ve found it to be really effective (particularly with boys) when constructing simple paragraphs. Love them or loath them, PEE paragraphs offer a basic structure when analysing a reading text and they do provide a starting point from which you can build pupil confidence. In this situation, one particular pupil had built a wall when it came to writing at length and struggled to structure written opinions beyond simple sentence statements.
We started off with an advert and asked how it persuaded the reader. The class had developed a vocabulary of techniques and although they found it simple enough to identify where they were being used, they struggled to analyse and subsequently explain why and how they were persuasive.
We began by working as a group, developing statements using the technique terminology e.g. The advert uses emotive language to make the reader feel upset about domestic abuse and supported these with the examples. For ease, we added these to a grid with three columns: Point, Evidence and Explain. The next problem came when trying to explain how the technique persuaded, as pupils had a tendency to simply re-word or repeat the point. We discussed this and discovered that the difficulty could be overcome by honing in on particular words within the text and applying 2 questions: How does it make the reader think and How does it make the reader feel? We explored words such as ‘abuse’ and ‘fear’ and thought about how differently the reader might feel if these were more simplistic expressions like ‘badly treated’ or ‘being afraid’. The discussion element framed by the questions really enabled a consideration of the impact of language choices and ensured the formulation of a thoughtful explain which they were proud of. We added it to the table.
It was easy to assume at this point that the next step was easy, simply transferring the three sentences from the grid in to a clearly structured paragraph. Not so. Hence the title, lollipop paragraphs.
One particular pupil struggled to transfer the information from the columns to the paragraph, so i came up with the idea of colour coordinating the columns: pink for point, orange for evidence and yellow for explain which enabled him to transfer the sentences on to post it notes of the same colours, put them in the correct order and then write up in to a paragraph. 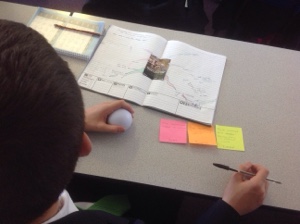 The most important element of using the colour coordination here was that it fed in to work on analysing the structure of sample paragraphs. This gave him the confidence to highlight the point, evidence and explain elements and ultimately helped him to structure (with the help of sentence openers) his own paragraphs. It provided him with the confidence to decode the structure of the paragraph and understand how to transfer this knowledge, applying it to his own work.
The drawback here is obviously that the paragraphs produced are initially rather formulaic and wooden, however the development from simple comment sentences to structured, analytical and supported paragraphs was a significant and positive development. Rather than being presented with straight refusal and work which lacked depth, i had a pupil who was confident enough to produce work he was proud of. As we progressed, i gave him a range of sentence openers for each element of the paragraph, enabling him to create his own lollipop paragraphs unsupported. Ultimately, we will remove them completely as his confidence continues to grow. A stark reminder (as if we need it!) of the importance and impact of process on outcome.