It’s been a while (far too long!) since my last post and as an integral part of my New Year’s Resolution list; I’m aiming to blog each week. Apologies to those of you that may have already heard about this technique, I presented it at #pedagoochristmasparty and did promise to write it up as a post so, here goes…

The Clarify-Prepare-Share-Link technique is something that draws on the work of The Accelerated Learning Cycle by Alistair Smith (http://www.alistairsmithlearning.com) (@alatalite) and Ian Gilbert’s THUNKS  (2007) (@ThatIanGilbert); combining elements of the two very effective methods to suit my own teaching needs. 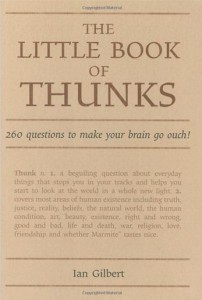 Accelerated Learning, in a nut shell, is learning which happens faster than standard learning, provides a deeper level of understanding and is an integral feature of the learning cycle adopted by my school. This is a very simplistic definition and for more detail I would recommend a far more articulate explanation and clear definition of the cycle in Accelerated Learning in Practice (1998) by Alistair Smith, or the TEEP Learning Cycle which was developed using his methods (http://www.teep.org.uk). Additionally, a THUNK, as defined by Ian Gilbert (2007) is: ‘a beguiling question about everyday things that stops you in your tracks’ (Little Book of Thunks – 260 questions to make your brain go ouch!) 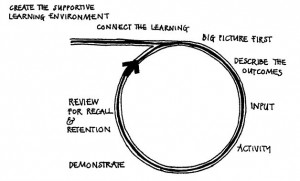 It is worth mentioning at this stage that if you do not already follow them on Twitter (unlikely I know), you must, as they are both an instrumental and inspiring source of teaching and learning knowledge.

At the beginning of term I found myself, as many teachers do, moving from one room to another when teaching certain classes, which posed concerns for two main reasons:

1)      Pupils were often there before I was and valuable time was being wasted at the start of the lesson.

2)      Further time was then required to settle the pupils and get them in to the correct ‘learning’ mindset, getting them thinking.

With a view to dealing with both, I decided to draw upon an idea that I first heard during a #teachmeet at Cramlington Learning Village, and started to leave a document wallet attached to the classroom door with my variation of THUNKs inside. 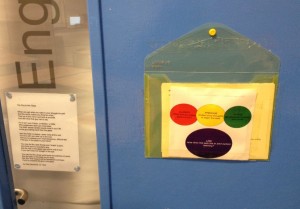 Initially, it did seem like a gimmick to the pupils concerned (which they loved) and they worked efficiently but as we all know, the novelty wears off eventually and it was important to clarify the process, to remove the ‘gimmick’ label and ground the activity as something worthwhile, rather than just an add-on or starter; which is where the link with Alistair Smith’s Accelerated Learning Cycle becomes important in developing a faster and deeper level of learning.

We (as a class) spent a large proportion of the ‘first lesson’ clarifying the process and levels of thinking required during each stage, (CLARIFY-PREPARE-SHARE) asking questions of each of the instructions and ensuring that all pupils were absolutely clear on the requirements. I found that expounding the ‘CLARIFY’ part was the most important; ensuring that they had actually read the task (initially some hadn’t and just assumed they were to collect it before coming through the door) and asking questions of the task; using each other as a resource before they were allowed to progress any further both physically (through the door) and mentally (with the task). I found it was really important NOT to allow them in until they had ‘clarified’…cue my staring hopefully at them through the window in the door for the first lesson but, I did find that the instructions on the door poster helped and they soon got the hang of it.

Having completed the CLARIFY stage, pupils were then able to come in to the classroom, sit down and PREPARE the task, confident that they could participate and most importantly, in the correct learning frame of mind for the lesson. They were thinking before they had even entered the room! This identifies the importance of choice of task and reinforces that it cannot be ‘stand-alone’ but must link in with the ‘cycle’ of learning or skills required during the lesson.

Linking in with the next stage, pupils were already aware that they would need to SHARE their work, weather this be with each other or myself, thus removing the opportunity to opt-out and ensuring that all attempted the task/s.

‘Well, that’s all well and good but what about differentiation?!’  I hear you cry!

In order to ensure that tasks are open to all while still providing a level of challenge, I tried to include 3 separate tasks which became progressively more difficult and/or were linked to the levelled assessment criteria of the appropriate exam board (see examples below). 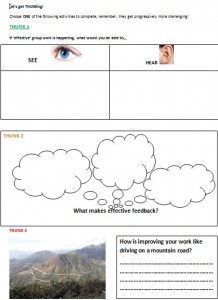 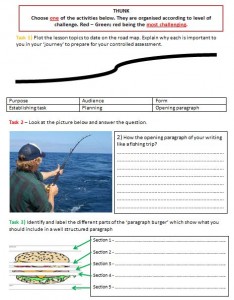 Each pupil, knowing their level, attempted the appropriate task and as pupils became more comfortable with the process; I found that although they may start with the ‘lower’ challenge tasks; they were often keen to challenge both themselves and their peers by attempting higher level tasks or, completing their ‘target task’ and moving on to the next level.

This is not without difficulties though. I did have issues initially, some pupils raced through all tasks just to prove they could do it, while the quality of work produced was poor. This does require immediate feedback and re-clarification of expectations at the PREPARE and SHARE stages and also within written feedback, in order to remedy before continuing. The mantra that providing one quality and well considered answer is far more important than three of a poor standard, was a useful one to share.

So far, this technique has ensured that my pupils are thinking on a deeper level before they enter the classroom and has also worked to settle the more lively characters but, in order to promote the THUNKs as a valuable element of the lesson rather than just an add-on or a gimmick, i found the most important part was asking pupils to LINK the learning. Asking questions such as How might this link with last lesson / the topic? What questions do you have / does the task produce? or Why might I have asked you to do this?, while carefully considering the choice of question stems to promote higher order thinking, are very important. If pupils clearly understand the value of the task, then it instantly becomes more meaningful.

I have been THUNKing since September (2012) and found that it works for my purposes but it may seem like a lot of extra work to some, which I accept…to a point. Stage 2 of the process will be getting my pupils to create their own THUNKs (as a plenary activity) for the following lesson, truly handing the thinking, and subsequently their learning, back to them.

I’ll let you know how they get on…